A hug is so familiar that sometimes it happens without notice. Whether used as a greeting, an act of love, a happy moment between friends, security or assurance, or used to solidify a departure, it’s the same act. Hugs occur between family, acquaintances, lovers, and sometimes strangers. The act of hugging is the same, but the intent and social construct around them is what makes them complicated.

A hug is only an embrace, a moment of physical connection, and we classify and pile on all the external factors of the people partaking in it to ascertain meaning. It happens in a split second, as if all is known instantly and that anyone witnessing it would have the details to do so. I can’t imagine hugs are a troublesome concept for many, but they were, and still are, a struggle for me.

I’m told I was a snuggler as a child, always running to sit on my mother’s lap in the morning, wanting to be folded into her robe so I could eat my cereal at the kitchen table. Pictures exist of me when I was young with my siblings and friends where we are in an embrace of some kind, so I know at one point, hugs and embracing someone didn’t freak me out. I don’t know when my feelings changed towards embracing others physically; I am still trying to pin down my memories, but I think I remembered some which may have factored into my subconscious decision.

The first vivid memories I have of hugging are from junior high school and hugging friends to greet or say goodbye. I remember seeing people hugging in the hallways and thinking it was an odd way to greet someone, something so intimate reduced to a habit and daily occurrence. It may have been all the hormones at that age, or maybe it was just the 90’s. I learned very quickly that if you don’t actively position yourself not to get hugged, people would embrace you regardless of your willingness to participate, and this infuriated me.

Around the same time, my family owned a nightclub for people aged 16 or older; I was 14. Every Friday and Saturday evening, I would work at our club and be at the ticket window, or the snack bar ready to serve you and keep you hydrated throughout the evening. Since it was an underage club, we didn’t serve alcohol, so what I mean is, I sold bottled water, chips, candy, and other snacks young people liked. It was less than glamorous, but I think the skills I learned in that job and time I spent in that environment had a lasting impact on me.

Since I was 14 and it was a family business, I didn’t get a paycheck. Yes, my family provided me a house, clothing, food, insurance, and anything else that was needed, but with the majority of people, when we have what we need, we focus on the wants. As a 14-year-old living in a world before Spotify, iTunes, and the internet, I wanted music and entertainment. Since these were wants and not needs, I was given a small amount every month to enjoy these frivolities but never enough to satiate. However, my job gave me a way to make some side money, so I took advantage of the opportunity, and, as a natural entrepreneur, I focused on how to earn tips. I quickly learned that a pretty young girl could flirt and make money fast, and that started a foundation of unhealthy relationships of giving and taking.

Depending on the crowd and how much I knew about them, I would make from $20 to over $50 a night, all without my parents knowing the extent of how much I made each night. I got so good at making tips that I eventually started sharing my tips with my sister so she could buy the things she wanted too. As a 14-year-old, I was rich but at a cost.

Everyone at the club followed the same greeting methods as I saw at school. As someone looking to build relationships and earn what I needed from them to buy the latest Pearl Jam or Oasis album, I would need to partake in the ritual of the hug. Keep in mind, the people at the club were all two or more years older than me. My parents forbade me from hugging people at the club, and rightfully so, especially in that environment with my age. Alas, my love for Eddie Vedder was too strong, so I couldn’t abide by the rules. The hugs would always linger a little too long, press a bit too firm, and creep me out, but they were a means to an end.

I think this may be where my distaste for hugging began. Hugging and physically embracing someone became transactions of sorts (i.e., if I hug you, you will consider me a friend, and then tip me when you visit the snack bar). Over the next few years and throughout college, giving a hug to someone I didn’t need something from became redundant and unnecessary in my mind. The act of hugging played such a poignant role in monetizing myself during a pivotal time of maturing for a woman that the impact on my life was I would retreat from physical interactions that I deemed an obligation without a justification.

My distaste for hugs bled into my familial life because, in my young angst, I believed that just because we shared DNA, it didn’t warrant them access to my body. Unfortunately, I was wise enough to know that was true at a young age, but not mature enough to vocalize my reasoning, so it built some barriers between me and those I loved without realizing it.

There is much more to unpack on this topic, but I will leave it here for today. To those wondering, no, I am not as opposed to hugging or embracing someone today, but I am still not a hugger by nature. There are some people I feel natural hugging, and others not. As always, I’m a work in progress and will continue to look at those relationships to better understand the dynamics. 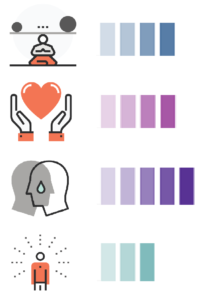